From posting personal content onto a company Facebook Page or sharing a unexpected “selfie” on your business Snap Chat, many people are fired for publishing things online all the time. But you cannot fire a company for making some serious media blunders – and this year has been no exception.

Have a read at just 3 of the 2017 Marketing and PR Blunders… there are more trust us!

After this year’s Boston Marathon, Adidas sent out an email to their entire database with the following subject line “Congrats, you survived the Boston Marathon!” inadvertently recalling imagery of the 2013 Boston Marathon bombing. Days later the company issued a heartfelt apology to their 3.9 million followers on twitter. 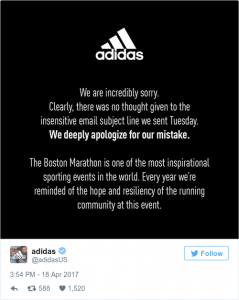 Dove gets it wrong – not once… but twice!

Dove was the latest company to find itself in some controversial, hot water after it ran what many saw as a racist advert on Facebook back in September.

The popular beauty brand which is known for its “real beauty” campaigns posted a short video on its Facebook page showing a black woman removing her top to reveal a smiling white woman underneath. The day after, the brand issued an apology and said in a tweet that it had removed the clip.

It was the 2nd time this year that Dove had bad press from one of their adverts. They went viral on social media in early May, in its ongoing effort to redefine beauty standards. Dove made a controversial move to reshape its shampoo bottles to reflect different body types. It may have sounded like a good idea on paper. But to many women, it had indirectly confirmed that there was a “best” or “right” body type, after all. 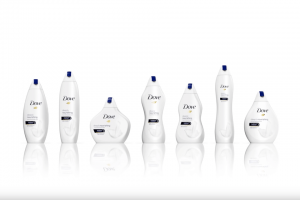 In April editors of Cosmopolitan were left red faced when their article in its popular monthly magazine went viral. “How This Woman Lost 44 Pounds Withough *ANY* Exerise” was the original headline… nothing wrong with that you say? Well when you read the article it explains that the woman the article was about had actually lost the weight as a result of a rare cancer. Many people thought the publication went too far which led  Cosmo to change the headline to “A Serious Health Scare Helped Me Love My Body More than Ever.” 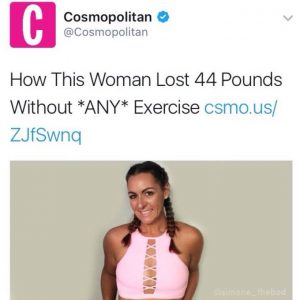 We hope after reading 2017 Marketing and PR Blunders it has has made you think before you click… REMEMBER once its posted online there is NO WAY of deleting it, its out there for the world to see!!

Need help with Content Marketing, or  Email Marketing then please do Get in touch to find out more.